Enhance gateway corridors through public investment within the right-of-way and private investment on adjacent properties.

During this process, in focus groups, online surveys, public meetings, and with the steering committee, numerous comments regarding the City’s image, its identity, and especially the impression of the entrances into the City were a topic of discussion.

In the context of city planning, a gateway is a landmark, land use transition, or significant feature that is a point of visual interest when entering a community.  Gateways into Lebanon play a significant role as part the regional transportation network, moving people into and around the City.  They also contribute to community character and the first impression realized by travelers passing through the City on I-65, new visitors to the community travelling along state roads 32 or 39, or residents who come in and out of City daily. Gateways are typically a combination of elements that work together to create an experience as someone traverses the City.  Various components of a gateway could include public art, landscape plantings, signage, adjacent private development, and various other aesthetic treatments.

The City has several gateways including: 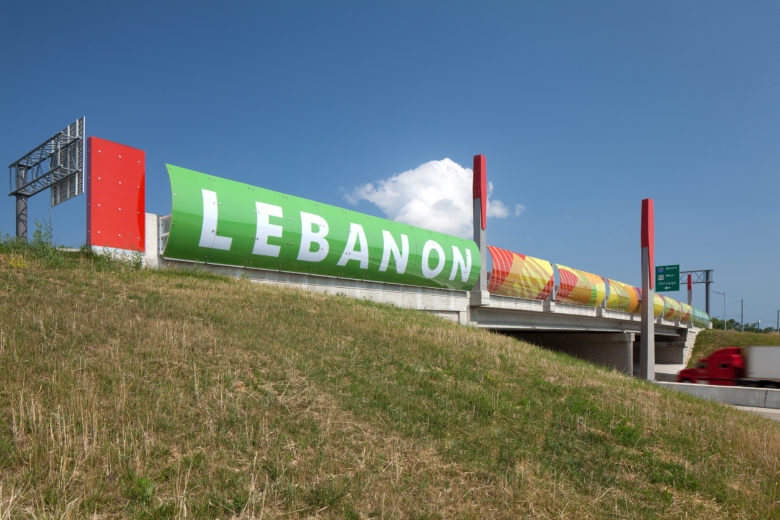 Existing gateway signage at the I-65 and S Lebanon Street (SR 39) interchange.

With the exception of I-65 and SR 39 (Lebanon Street), there are few distinguishing features at any of the major gateways, such as welcome signs, landscaped areas, or architectural details to communicate to passers-by that they are entering a special place. While the I-65 and SR 39 gateway has received mixed opinions from those in the community, there is no doubt that the signage is a distinguishing feature that identifies Lebanon from other communities along the interstate corridor.

Typically, gateways are characterized in two categories – major and minor.  Major gateways would include I-65 and SR 52 (Lafayette Avenue), I-65 and SR 32 (South Street), I-65 and SR 39 (Lebanon Street), and I-65 and Indianapolis Avenue.  Major gateways elements should include features such as bicycle and pedestrian facilities, landscape treatments, lighting, art, signage, restricting certain land uses, and design regulations for development in the area.  These gateways tend to be the most used entrances into the community and in Lebanon’s case, are all associated with I-65. Therefore, to make an impact, the elements of the gateway must be scalable to be seen at high rates of speed. 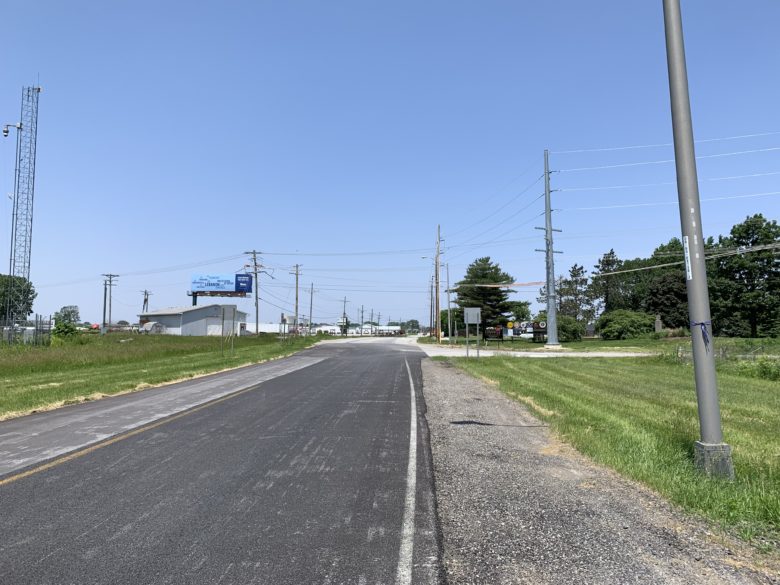 A view of Indianapolis Avenue, heading north into Lebanon. 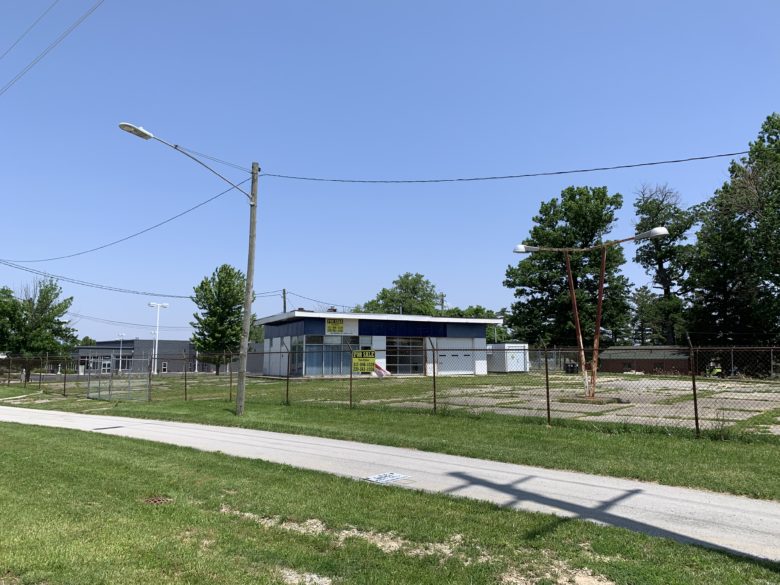 The I-65 and SR 32 gateway area can be characterized as a fairly typical interstate interchange, developed with fast food restaurants and hotels.  However, restrictions could be placed on land uses through an overlay district.  Prohibiting uses at the gateways, or limiting a use, such as only allowing one gas station at each gateway, requiring more on-site landscape, buffering trash areas, and orienting loading docks away from the road, are all zoning regulations that can set the character for the gateway.  Access management practices along the roadway may also help the function and appearance of the area, especially as redevelopment and infill occur east along South Street and new development happens to the west.  Since INDOT controls SR 32, access management and improvements within the right-of-way will have to be an on-going discussion between City leaders and the Crawfordsville district of INDOT. 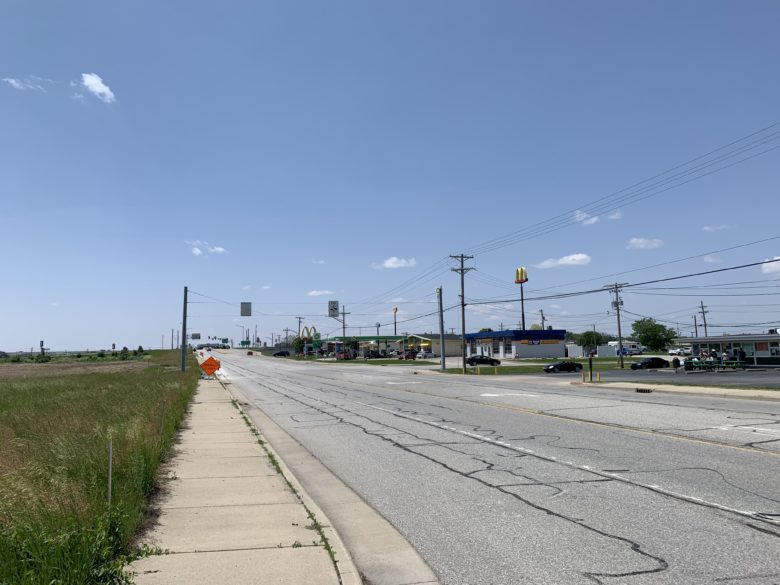 A view of W South Street (SR 32), looking west towards the I-65 interchange.

The I-65 and SR 52 (Lafayette Avenue) gateway area has a different interchange configuration than a traditional diamond-shaped interchange.  The land uses adjacent to the highway include single-family homes and apartments to the east and auto-related and salvage businesses to the west.  Travelers can see this directly from I-65 heading southbound.  An interchange feasibility study was conducted for this area as a precursor to potential re-design or re-location of the interchange by INDOT.  Discussions are still very early and the project does not have any funding allocated, but should INDOT proceed with substantial work at the interchange, the City should advocate for and consider funding additional gateway improvements.

The I-65 and Indianapolis Avenue interchange and gateway area includes a mixture of industrial, commercial, and institutional uses.  Because of its atypical configuration it does not experience traffic volumes as high as the SR 32 and SR 39 interchanges.  However, it is the first Lebanon interchange heading north from Indianapolis, and as such is a major gateway.  A “Lebanon Indiana” monument sign is present on the east side of the road, just north of CR 100 S, in front of the Boone County Fairgrounds.  Unfortunately, this signage is out of scale with the surrounding area and isn’t readily noticeable. The City has made significant investments in the Indianapolis Avenue corridor including a multi-use path, new paving, curb and gutter, and roundabouts at Hendricks Drive and CR S 100 E. A second phase of streetscape improvements is planned to continue this right-of-way configuration to the north.  The City should now focus efforts on improving the appearance of adjacent development. This should include standards for landscape, lighting, signage, and architectural character.

Minor gateways are secondary entrances into a community that do not carry a significant amount of traffic but still serve as an entrance.  Minor gateways incorporate some of the elements of a major gateway, but are typically smaller in scale to reflect surrounding context.  For Lebanon, those gateways are at SR 39 and CR W 300 N (north City limits) and SR 32 and Spencer Avenue/Indianapolis Avenue.

No matter the type of gateway, the City should develop a set of standards for gateway areas that reflects the City’s brand identity.  An update to the 2010 Lebanon Gateway and Corridor Master Plan is needed to truly set the vision and design standards for each gateway that can then be communicated to the Indiana Department of Transportation (INDOT), developers, and property owners. The plan update would: 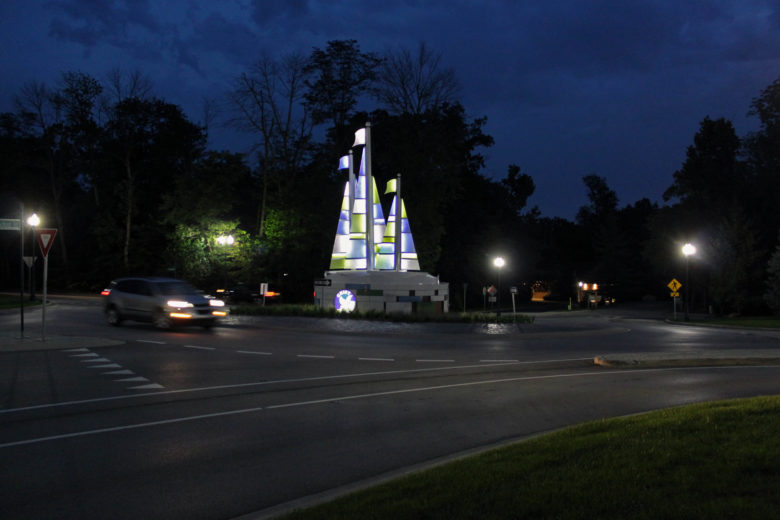 A gateway installation in the Geist Reservoir area of Fishers, IN.

A gateway monument and landscape plantings along SR 67 in Mooresville, IN.