Continue to assess and advocate for improved access into and around the City, including redesigned and new interchanges.

Access in to, out of, and around a community is critical from both an economic development and quality of life standpoint. Luckily, Lebanon is at the crossroads of many thoroughfares – Interstate 65, US Highway 52, State Road 32, and State Road 39.  However, what all these corridors have in common is that they are under the management of the Indiana Department of Transportation (INDOT).  When improvements or changes are needed to any of these roadways, INDOT is the agency responsible for the design and construction.  INDOT will typically include a public input component to major roadway projects and will consult with local leadership. Given the importance of these corridors, it is imperative for Lebanon to be actively involved in discussions with INDOT for changes or improvements.

Roads not managed by INDOT are under the purview of the Lebanon City Engineer and Streets Department.  Therefore, Lebanon has more control over the design and maintenance of these roadways.  To ensure that the local road network supports future development options, the City completed a Thoroughfare Plan in 2017. [LINK]

I-65 plays an outsized role in the overall transportation and development framework of the City. Of the five I-65 interchanges within or adjacent to City limits, three are the common diamond interchange design. The other two interchanges, US 52 and Indianapolis Avenue/Hall Baker Road, are atypical and don’t provide the clear access preferred by many businesses. Throughout the public engagement process, numerous residents and business owners commented on needed improvements to these interchanges. Additionally, these interchange designs, and especially the left-side exit from southbound I-65 onto US 52 at exit 141, are no longer preferred by INDOT. Because of this, an interchange feasibility study was conducted for the north (US 52) interchange. 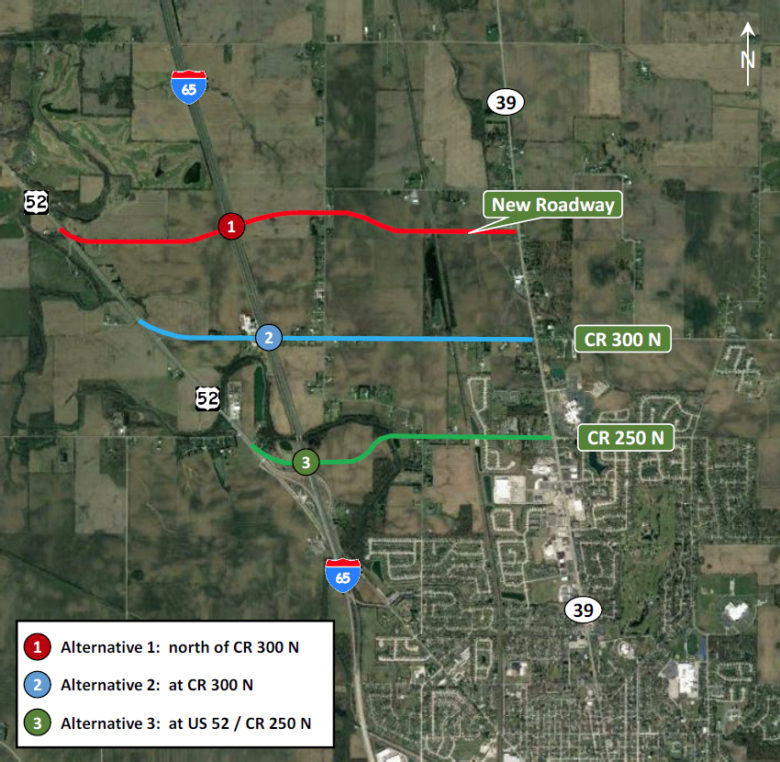 A map of the three alternatives explored in the I-65 Lebanon North Interchange Feasibility Study. Credit: American Structurepoint Inc.

Also discussed during the planning process was the desire among City and business leaders for a new interchange in the southeast portion of the City, between exits 133 and 138. This recommendation was included in the 2017 Thoroughfare Plan, with the potential interchange near CR 250 S.  Whether this interchange is warranted will be dependent on the type and intensity of future development in the area.  As such, it should be considered long-term.

Ultimately, to achieve improved or new access sooner than what may be included on INDOT long-range plans, Lebanon may have to leverage local funds.  Providing local funds has been a common occurrence with communities in Central Indiana.  Cities like Greenwood, Fishers, Noblesville, Carmel and Westfield all have worked with INDOT to either relinquish roads to the city or have provided local funds to supplement design work in accordance with community goals.